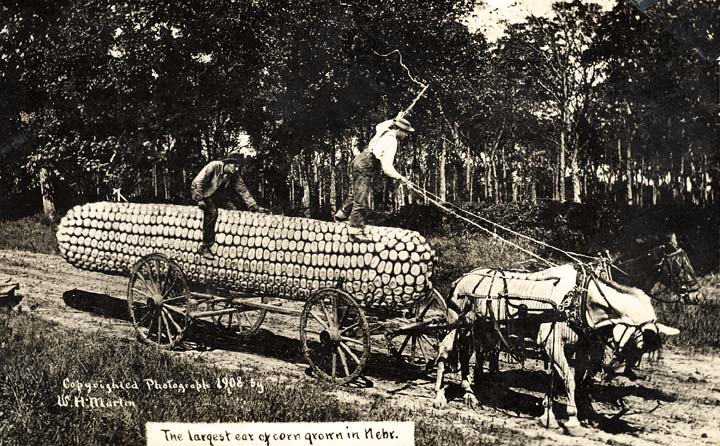 Largest ear of corn in Nebraska, ca. 1908.
Courtesy of the Nebr. Historical Society.

ancy colored yield maps are fine for verifying grain yields at the end of the harvest season, but bragging rights for the highest corn yields are established earlier than that down at the Main Street Cafe, on the corner of 5th and Earl. Some patrons of the cafe begin “eyeballing” their yields as soon as their crops reach “roasting ear” stage. Some of the guys there are pretty good (or just plain lucky) at estimating yields prior to harvest, while the estimates by others are not even close to being within the proverbial ballpark. Interestingly, they all use the same procedure referred to as the Yield Component Method.

Other pre-harvest yield prediction methods exist (Lauer, 2002; Lee & Herbek, 2005; Thomison, 2015), but the Yield Component Method is probably the most popular because it can be used well ahead of harvest; as early as the so-called “roasting ear” or milk (R3) stage of kernel development. Under “normal” conditions, the kernel milk stage occurs about 18 to 22 days after pollination is complete (Nielsen, 2016). Estimates made earlier in the kernel development period risk being overly optimistic if subsequent severe stresses cause unforeseen kernel abortion (Nielsen, 2013).

Final weight per kernel obviously cannot be measured until the grain is mature (kernel black layer) and, technically, at a grain moisture of 15% since that is the typical moisture value used to determine a 56-lb market bushel. Consequently, an average value for kernel weight is used as a proverbial “fudge factor” in the yield estimation equation. As first described many years ago, the equation originally used a “fudge factor” of 90, which represented 90,000 kernels per 56-lb bushel. In terms of how kernel weight is usually measured in research, this would be equal to about 282 grams per 1000 kernels.

Crop uniformity also influences the accuracy of any yield estimation technique. The less uniform the field, the greater the number of samples that should be taken to estimate yield for the field. There is a fine line between fairly sampling disparate areas of the field and sampling randomly within a field so as not to unfairly bias the yield estimates up or down.

Repeat the procedure throughout field as many times as you deem to be representative. Tally and average the results separately for each “fudge factor” used for the calculations. 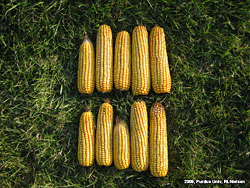 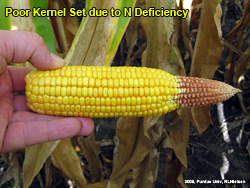 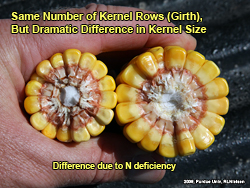 Recognize that the Yield Component Method for estimating corn grain yield is probably only accurate within plus or minus 20 bushels of the actual yield. Obviously, the more ears you sample within a field, the more accurately you will “capture” the variability of yield throughout the field. Use the yield estimates obtained by this method for general planning purposes only.

There are a number of apps available for download to your smart phone or mobile tablet that can be used to simplify the calculations of the Yield Component Method. Some crop scouting apps include grain yield estimators as one of their features. Be sure to thoroughly test the calculations of any app you choose to use on your phone to ensure that the math is correct. Some offer multiple kernel “fudge factors”, but do not literally specify what kernel numbers per 56-lb bushel they use. Some only allow you to sample 3 ears at a time. Most do not allow you to sample AND save the results of multiple sites within a field or multiple fields in an operation. As the old adage says… “Buyer beware!”

This curmudgeon prefers to do the math the old-fashioned way… with my smart phone calculator and a note pad.

The Pro Farmer division of Farm Journal Media sponsors an annual Midwest Crop Tour that sends out teams of “scouts” to visit corn fields throughout the Midwest to estimate yields. The method used in that effort is a variation of one described years ago by University of Minnesota agronomist Dale Hicks (now Professor Emeritus) that combines the use of several yield components (ears per acre and kernel rows per ear) with a measurement of ear length (a proxy for kernel number per row).

The focus of the crop tour is not to necessarily estimate the yields of specific fields, but rather to more broadly estimate the yield potential within regions of the Midwest, so one probably should exercise caution in using this method for estimating yields within an individual field. Nevertheless, folks who have heard about the Pro Farmer Tour may be interested in trying the method themselves, so here are the steps involved with the Pro Farmer method (Flory, 2010; Mick, 2013). I would certainly suggest that these steps be repeated in several areas of an individual field because of natural spatial variability for yield.

Tip:
For subsequent yield estimates within the field, I would suggest walking even further into the field and crossing over multiple planter passes to sample different areas of the field.

Tip:
Frankly, I would suggest harvesting up to 5 ears from each of the two adjacent rows to better sample the area and minimize the effect that one oddball ear could have on the calculated average ear lengths and kernel row numbers.