An article on the front page of Saturday’s Des Moines Register explored issues associated with corn and soybean production, prices, and farm profitability in Iowa.  Meanwhile, the Federal Reserve Bank of Kansas City released a paper last week which noted that, “Lending at agricultural banks appeared to stabilize in the third quarter of 2017, but risks in the sector have remained alongside a persistently weak agricultural economy.”  Today’s update includes highlights from these two current news items that shed additional light on the state of the Corn Belt farm economy.

The Des Moines Register- “Hoping to Break Even.”

Donnelle Eller reported on the front page of Saturday’s Des Moines Register that, “Here are some numbers worrying Nodaway farmer Bill Shipley: He could get $8.96 for each bushel of soybeans he brings to his southeast Iowa elevator.

“But the statewide average cost is over $9 a bushel.

“Corn prices are even more grim: Iowa farmers could potentially lose 30 to 40 cents per bushel, with prices around $3 at Iowa elevators, based on estimates from Chad Hart, an Iowa State University economist.” 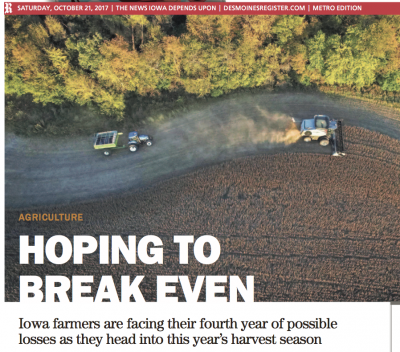 The Register article explained that, “Despite drought concerns this growing season, Iowa farmers are expected to produce the state’s second-largest soybean crop, behind last year’s, and third-largest corn crop, following only 2016 and 2015 harvests.”

More broadly, the Register article pointed out that, “Nationally, it’s the largest soybean crop and second-largest corn crop ever.” 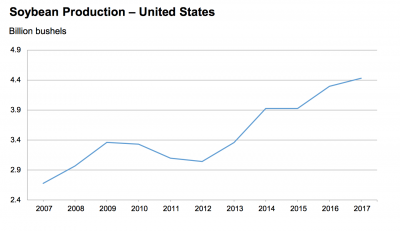 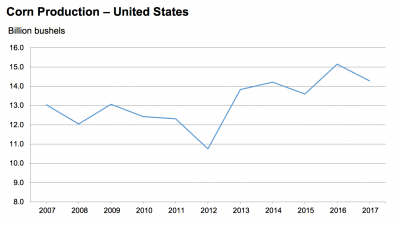 “U.S. farmers are expected to see a 3.1 percent increase in profits this year, thanks largely to improved pig, cattle and other livestock returns.

“But Hart says Iowa farms will be lucky to see a 1 to 1.5 percent increase, given the state’s large grain production.

‘For a good number of Iowa farmers, it will be a fourth year of losses,’ Hart said.

Saturday’s article also stated that, “It’s not just corn and soybean prices that are on Shipley’s mind.

“He and Ray Graesser, both southwest Iowa farmers, are concerned about the Trump administration’s efforts to renegotiate the U.S. trade agreement with Canada and Mexico.

“Add to it: Uncertainty around the amount of ethanol and biodiesel that will be required to be blended into the nation’s fuel supply in the months ahead.”

On Thursday, Nathan Kauffman and Matt Clark, of the Kansas City Fed,  indicated in a paper that, “Lending at agricultural banks appeared to stabilize in the third quarter of 2017, but risks in the sector have remained alongside a persistently weak agricultural economy.”

More specifically, the authors pointed out that, “The pace of farm lending at commercial banks in the third quarter largely was unchanged from a year ago. Survey data indicate the volume of non-real estate farm loans originated in the third quarter increased about 2 percent from the previous year (Chart 1). The slight increase followed a similar year-over-year increase in the second quarter after sharp declines in lending activity the previous two quarters.” 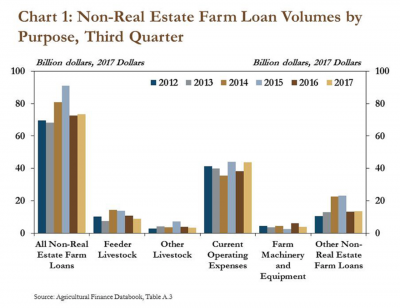 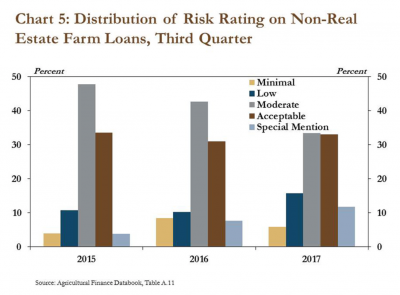 Last week’s update noted that, “In addition, the pace of increased demand for loan renewals and extensions has steadied somewhat over the past several quarters.

For instance, the share of bankers reporting increased demand for renewals and extensions declined in the second quarter in most Districts with a significant agricultural concentration (Chart 11). Only the Minneapolis District reported a very minor increase.

And with respect to farmland values, the Kansas City Fed report stated that, “As farm debt has continued to increase, albeit at a more modest pace, the value of farmland has remained a crucial component to farm-sector balance sheets and financial stress. Although farmland values have continued to moderate in most areas, values have stabilized in some states, and generally have remained strong overall. In Iowa, southern Wisconsin and Texas, the value of farmland increased slightly from the previous year. Farmland values in other parts of the Corn Belt, such as Illinois, Indiana and Missouri, continued to decline modestly, but remained well above values of a decade ago (Chart 12).” 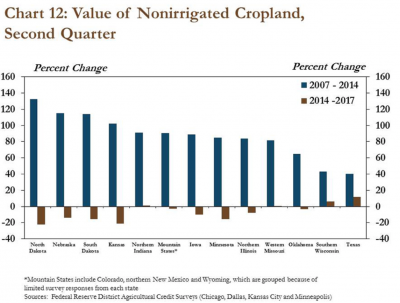 At the conclusion of the Fed report, the authors indicated that, “Some borrowers may find it increasingly difficult to obtain credit amid low profits. Meanwhile, rising loan-to-deposit ratios at many agricultural banks also may induce more caution in the months ahead.”

Keith Good is the social media manager for the farmdoc project at the University of Illinois. He is well known in agricultural circles for the daily FarmPolicy.com News Summary.